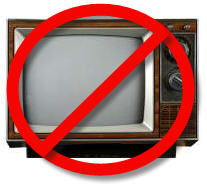 As Professional Organizers, people often complain to us that they do not have time to get organized.  Yet, according to Nielson figures from 2006, the average American spends 4 hours and 35 minutes per day watching television!  That is over 32 hours a week!

Imagine the clutter you could conquer, the hobbies you could pursue, the quality time you could have with your children– if you were to experiment with watching less TV.  Monday, April 23rd, starts National TV Turnoff Week (see www.tvturnoff.org for lots of great information).

Our Clutter Diet weekly organizing plans are designed like a menu, with a Main Dish, two Side Dishes, a Sensible Snack, and a Dessert reward.  We recommend spending one hour and 30 minutes each week focusing on organizing these certain planned areas of your home.  That is just 3 short TV shows.  Even if you just TiVo’d everything for later, that would save you a lot of time in commercials alone– certainly enough to do this amount of organizing!

What would YOU do with 4 extra hours per week?  How many times have you wished for this time for yourself?  Make a note to yourself of at least 3 things you would love to do instead of watching television, and take action toward making those things happen.  Click here for a fact sheet that includes some suggestions on how to make it easier to wean off the beckoning screen.  Talk to your family this week about the idea of less TV and give it a try!