I knew I had a clutter problem. I knew it because everytime I tried to walk through my dining room, I felt like a goat in a junkyard…stepping over things and around things constantly. I was tired of it, but it wasn’t until I looked in a bag on the dining room table in early December and found…WOW…Christmas presents I had received LAST YEAR? I immediately walked into another room and fired up my computer (isn’t that what we clutterers do when we don’t know where to start? Anything except what we know needs to be done so we can avoid thinking about how long it’s going to take to even make a dent?) Luckily, this time I found the ClutterDiet.com website and jumped on the 2 week Free Trial Offer. I spent Sunday afternoon exploring the website (that was more fun that actually working, right?), and watching tutorials and prioritizing what needed to be done each day that week, and sending myself reminders to do those things. I took pictures of all of my clutter. Once my daily emails started coming in, I began to look forward to those and was surprised that my discussion board posts resulted in responses from people who were willing to take their time to give me ideas to address MY issues, and to congratulate me on the little things that I didn’t see as any big accomplishments.

In all honesty, I already knew that I needed to grab a garbage bag, a donations bag and a container for things that belonged in other rooms and jump right in. I knew what needed to be done….I just didn’t want to spend my whole life doing it. But the website was kind of fun and the emails really reminded me that I had set priorities and they needed to be done…and 15 minutes at a time was not only acceptable, but actually doable. Before long, it became almost like a game, and 6 days after I joined, I had accomplished what had not been accomplished in the 11 previous months. 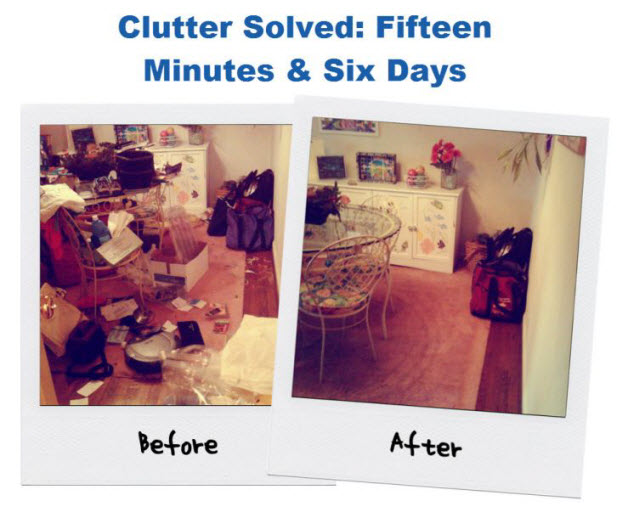 The resources on the website have changed my mindset enough that I am now looking forward to continuing on with my decluttering “game”. Posting before and after photos really made it hit home that I had, in fact, made a dent and it feels great to have reclaimed an entire room (plus I found last year’s Christmas presents and a whole lot of really fun things I had totally forgotten about). I am excited to have a place where I can post my before and after pictures, and it may be December 2013 before the whole process has been completed and documented, but if I ever feel discouraged, I will go back and look at these pictures to remind myself what CAN be done in 6 days and how good it can make me feel! –Diane Clark